Rio's Mysterious Bump? What is a Histiocytoma?


Nothing beats getting to know multiple generations of a family. As hard as it is so say goodbye to one pet when it passes away, it is pure joy to meet the next new addition to the family. Sadly, of all of the clients that I see I would estimate that only about 50 percent of them adopt another dog after their only dog has passed away. Especially if that family is an older retired couple. But that is a topic for a blog anther day…

For those clients that do adopt another dog I love to see the joy a new life, so full of new energy, curiosity, and the proverbial “I forgot how much work a puppy was!”


This is Rio. He is a Belgian Shepherd. He may look rather ominous, but he is rather small and lithe under his long luxurious coat and serious face. His ears stand straight up and did so at a very early age, (for the German Shepherds this can be a long and somewhat frustrating task that keeps us guessing as to when and if they really will ever stay up?). Rio was adopted as an early Christmas present to his parents from each other.

He arrived off the plane as a tiny bundle of ebony fur complete with Santa hat. He, like every puppy that enters a home after the departure of a pet who has passed away from old age and disease, seemed like (and was) a bolt and jolt of lightning. Their previous decade of caring for a well-trained, sedate, courteous adult dog became a life that quickly required baby proofing the home, the trials and tribulations of housebreaking (always made significantly more difficult when attempted in the middle of a record awful winter), the in home gymnastics and calisthenics when it’s too cold and snowy outside to burn off steam, and teething. For a retired couple I answer a lot of questions, but most of them include a few affirmations that “yes, this is normal puppy behavior.” Followed quickly by the sworn testimony of the pleadings that their last dog was “never this wild,, high strung,,, hard to train,, crazy,, loud,, mouthy,, bite-y,, playful,, hungry,, etc. etc.. 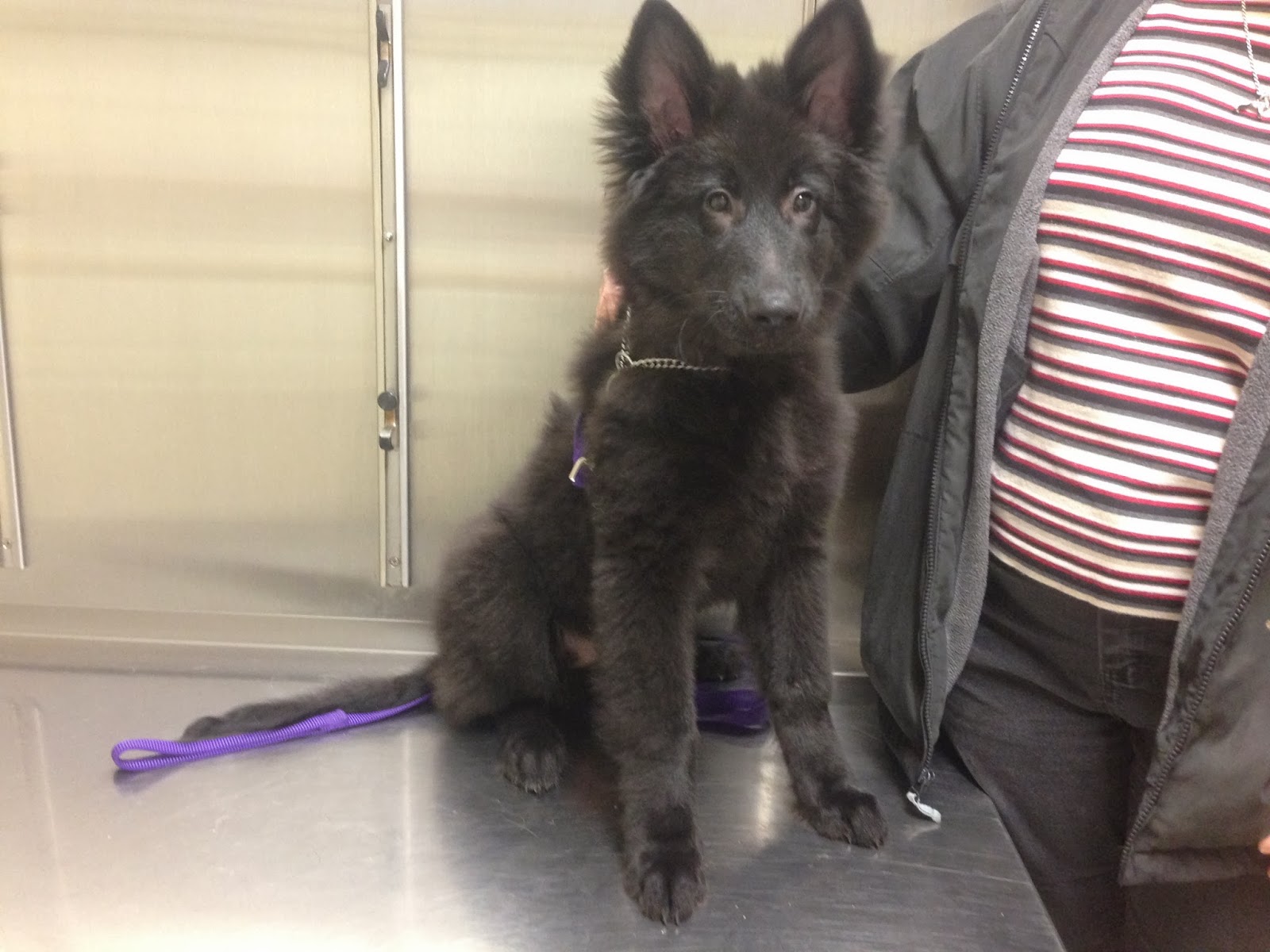 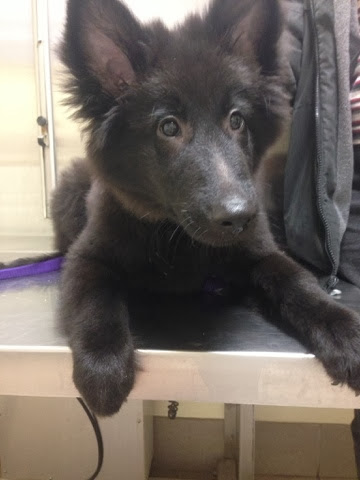 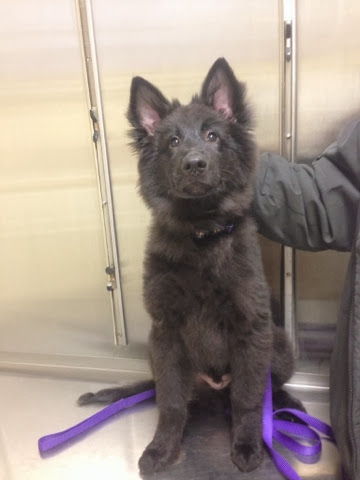 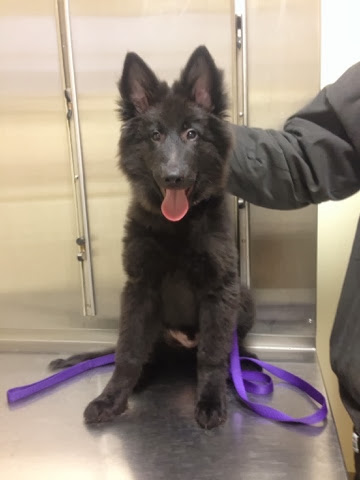 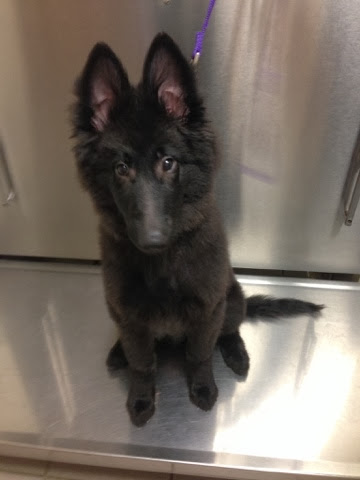 Rio was always a very smart, rambunctious, and happy puppy. He was housebroken in a few weeks and continues to grow exactly on schedule with an excellent daily regimen of excellent diet, exercise plan, and good puppy manners training. I saw him exactly on schedule for every needed check-up, vaccination, and miscellaneous puppy question. But at his 3 month old puppy exam his parents mentioned to me that they were concerned about a bump on his nose.

Sure enough he had a rather ugly red round raspberry looking bump on his nose.

Understanding bumps and being able to categorize them by sight takes years. You see “lumps and bumps” can come from too many things that can resemble each other, and come from various etiologies. Some are benign cosmetic bumps, and some are potentially life threatening tumors that need to be addressed quickly. So when it comes to trying to figure out which is which is where your vet is an invaluable resource.

Lesson Learned: Pay attention to bumps, lumps, and skin abnormalities immediately by asking your vet about them! Also, follow their recommendations for diagnosing and treating them. If they feel a biopsy, aspiration, or medical treatment plan is indicated I encourage you to listen, AND, follow up with all recommended re-checks.

Here were my answers:
All of this leads me to giving you some hints about what I suspected Rio’s bump was.

Here is what we did.

I explained to Rio’s parents that like every diagnosis in medicine the only definitive way to correctly diagnose a lump or bump was to remove (or take a sample) of tissue and examine it at the microscopic level. Without doing this we were making a presumptive diagnosis. Sometimes we skip this step based on cost to run the confirmatory pathology tests, time constraints of patient health (say for example a bleeding intra-abdominal mass that needs to be removed immediately so the patient doesn’t bleed to death while we wait for a pathology report), a response to treatment that indicates a diagnosis, or even a good educated guess on your veterinarians part. But definitive diagnosis should always be made by a biopsy, guessing, whether well-educated or not, is still guessing. Rio’s lesion was about a quarter of an inch, or about a half of a centimeter, and right beside his nose. This left either removing it with surgery, or trying to get an impression smear with a glass slide. Now Rio is a bouncy boy who prefers to be lunging at your face to kiss you then be expected to hold still. He is also about three months old. We decided to take my presumptive guess as a diagnosis and IF the lesion worsened or grew we would remove it for biopsy at the time of his neuter, which we could do early if needed.


My presumptive diagnosis was that Rio had a histiocytoma. “A histiocytoma is a common but benign tumor affecting the skin. Their cause is unknown but believed to be a consequence of proliferative or reactive hyperplastic Langerhans cells (these type of cells overpopulate without known cause) but are not truly considered neoplastic (cancerous). They are most commonly seen in young dogs under age 2. They are usually solitary and found on the head, ears, and limbs. They are usually less than 3 cm in diameter, firm, dome, or button shaped, well circumscribed, dermal in location, and frequently ulcerated. They are fast growing but benign. Diagnosis is based on cytological examination.” (Edited from Muller & Kirk's Small Animal Dermatology, 6th edition).


Our plan was to monitor the lesion closely and come in for weekly re-checks (or send me a photo and give a brief update via phone or email).

It has been a little over 8 weeks and the bump is gone. A small hairless area remains but I expect this to fill in normally over the next few weeks. I also expect that there will never be even the tiniest hint that the bump was ever there at all by then.


If you have any lump, bump, or any thing in between,pet question, you can find me and a whole bunch of other helpful people at Pawbly.com. We are the best place to share information, exchange pet photos, meet people with similar pet interests, and join the pet social network to help pets around the world!

Thanks for visiting! Now go kiss your pet! 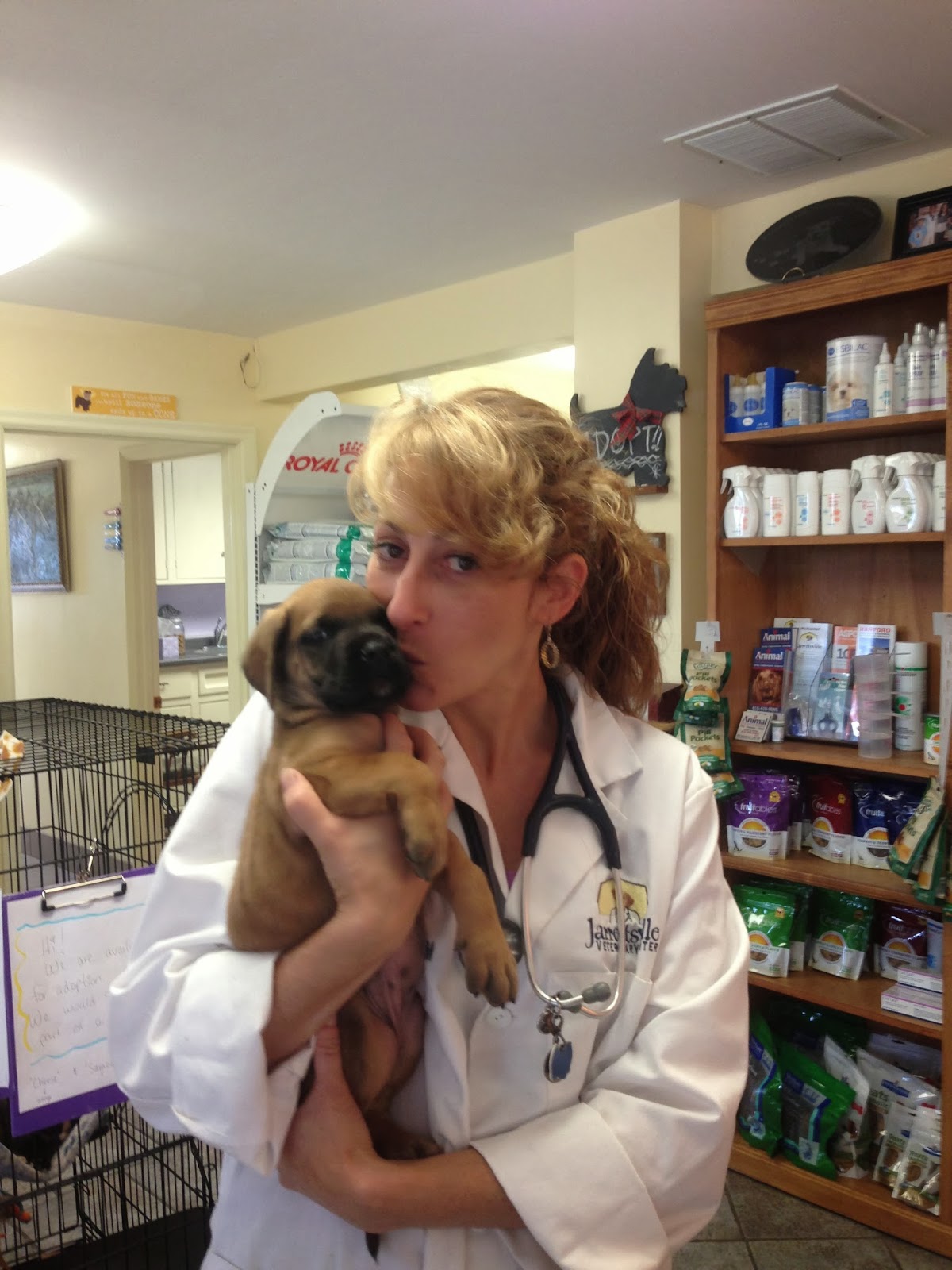 This blog is dedicated to Abby..who left little Rio with some amazing shoes to fill and a lifetime of love, smiles, and joyful memories to those who miss her. 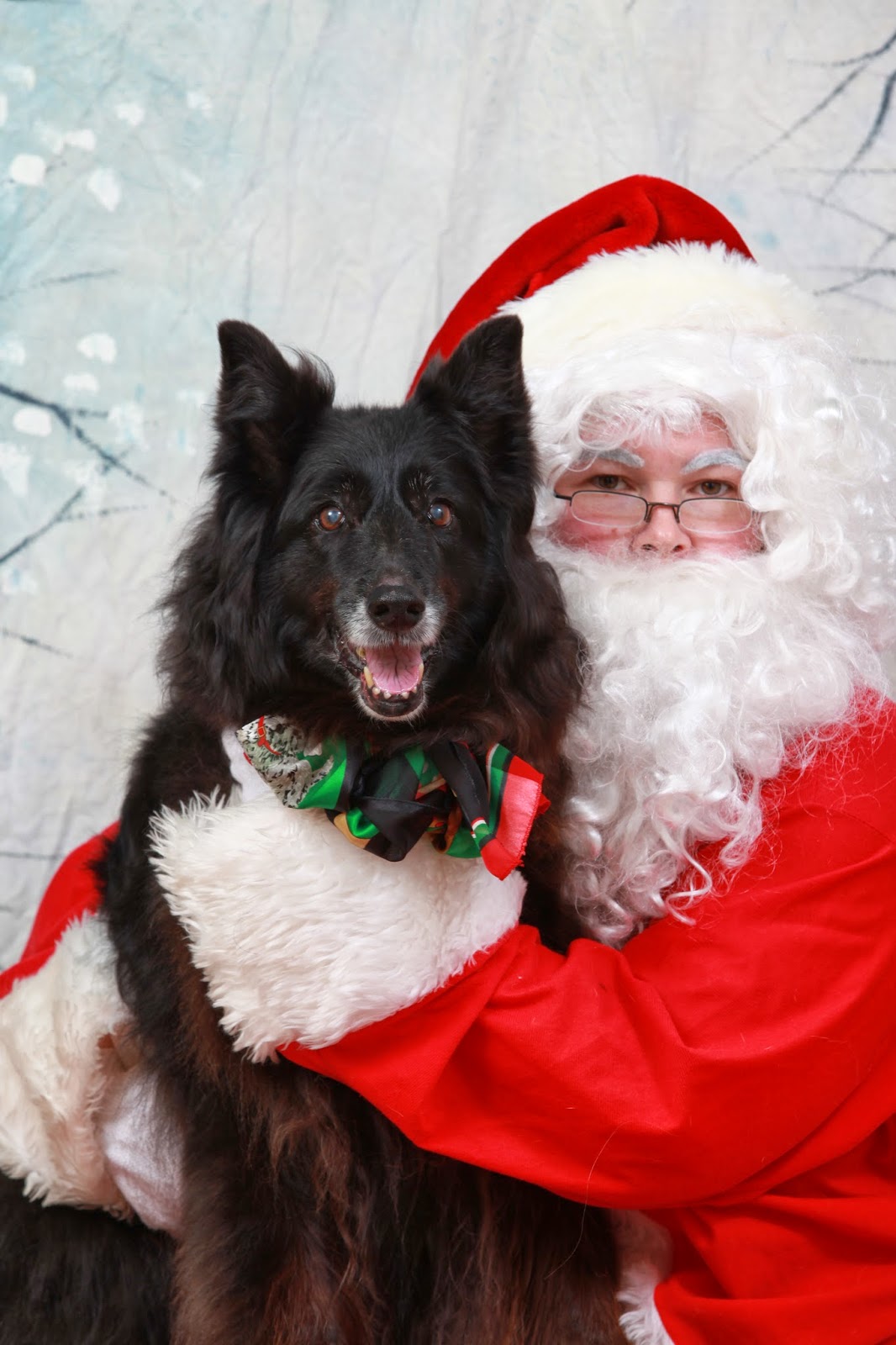